With Typinator, you can insert pictures in documents, as if you pasted them from the clipboard. However, this does not work as expected when you type an abbreviation for a picture expansion in a spreadsheet cell. The reason for this is that pictures are normally not allowed inside a cell, but when you type the abbreviation, the focus is inside a cell.

The solution is similar to the Inserting multiple spreadsheet cells tip. You first need to “escape” from the current cell by simulating the esc key with the {esc} marker. To do so, create a “Formatted Text” expansion that starts with {esc}. Then paste the picture right after the {esc} marker. The abbreviation should look like this: 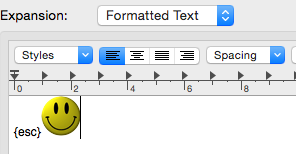 This technique works fine in Numbers. The result is a spreadsheet cell that contains the picture:

Unfortunately, this does not work in Excel, since Excel does not support pictures inside cells (only on top of spreadsheets). As a workaround for Excel, put the picture into Typinator’s “Includes” folder (see Typinator’s User’s Guide, chapter “Markers in the {…} menu”).

For example, you could put the smiley picture as a PNG file in a subfolder called “Pictures”. Then create a plain text expansion, start with {esc}, then click the {…} pop-up and select the picture from the “Pictures” submenu. The complete expansion will then look like this:

When you type the corresponding abbreviation in an Excel cell, the {esc} marker first exits the current cell, and then Typinator pastes the picture into the spreadsheet document. The picture appears with handles, so you can now move and resize it:

BTW, this second technique also works for Numbers, but it also puts the picture in a layer on top of the spreadsheet rather than inside a cell.