Why is PopChar the better character map?

PopChar could be described as a better, easier character map. It is a utility application that lets you insert characters from all installed fonts into your documents. You no longer need to search for and remember keystrokes to type special characters and umlauts. Just pop up the PopChar window, click the desired character, and the character appears in your current document.

Whenever you need a special character, PopChar is there to help. Click the little "P" box in the system tray to display a table of characters. Select the desired character and it instantly appears in your document. No more memorizing keystrokes. 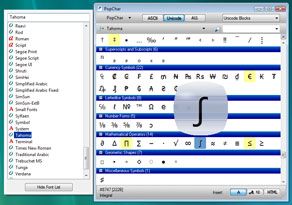 PopChar is available for both Mac and PC users! Read more about the Mac version or the Windows version of PopChar here!

We hope that we have convinced you that PopChar is the solution you're looking for - so go ahead and download our character map straight away!

Download.com gave our character map five stars! This is what they said:

This product is amazing! how many times have i been looking how to insert that one special character like: "Ñ" Well no more timewasting! I can just click on the start-up icon and choose the character i want in mere seconds! I love this program!!!

What is a character map?

Do you know anyone with a name that contains special characters or umlauts? Perhaps you have a sister-in-law who's called Hélène? Or a colleague whose name is Bergström, and who insists that the dots above the o can't be ignored? If you've ever had to type their names, you'll know that it usually involves one of two annoying methods: you can use certain keystroke combinations (and memorize them for future use), or you can call up the slow, clumsy, traditional character map. It's not easy to find the characters you want, and if you're a frequent user of the character map you'll soon get tired of how long-winded it is.

Fortunately, there is another alternative - PopChar - the user-friendly character map. It is easy to use and even easier to access, because this character map sits quietly in your user tray. Whenever you need a special character, it is there - no matter what application you're currently using.

PopChar is also a better option than the normal character map if you need to insert Hebrew characters, Arabic characters, HTML characters, Unicode characters and more.

If you are a web publisher you will appreciate PopChar's ability to insert the HTML codes of special characters.